I have NO idea what I was thinking.

Back in January, Ken Walsh, CEO of the Alfond Youth Center, called me up and asked if I wanted to join an exclusive club of Polar Bear Dippers. I really enjoy Ken so I said I’d love to. I did ask for details but he didn’t give many promising I’d get them later.

I missed the first meeting and the phone calls with two other AYC staff didn’t give me much more information. Somehow I missed that this was a fund raiser and I was supposed to collect money.

So this morning, I get out there and it’s freezing. Literally. To add to the fun, it’s snowing!

The AYC folks had made a pool outside with mounds of snow and filled it from a local fire hydrant. Bbbbrrrrr.

Right now, Ken is really at the top of my list because he let me go right after the National Guard did. (Here’s a picture of them.) Unfortunately, they did nothing to warm the water up. 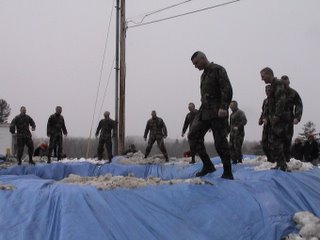 So then it was my turn. Flattered, Ken interviews me for the cable channel. I’m shivering by this point. 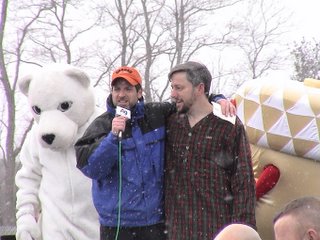 I’m wearing a night shirt because I’d been told there was a costume contest. I’d looked for my graduation robe so I could go in as a clergyman but it must not have made the move. So the night shirt was next on the list.

I tried going in as though I were sleep walking. Here’s the splash. 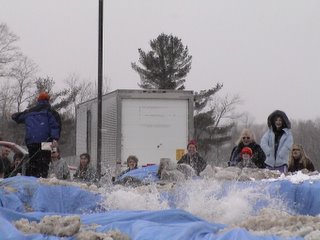 It’s gratifying that people are laughing. I certainly wasn’t.

I have never been so cold.

I remember reading in The Perfect Storm about being “oriented times zero.” I wasn’t at zero but I was stinkin’ close.

Those who know me, know I’m rarely at a loss for words. I was speechless from the point of that splash. I really wanted to be funny but I couldn’t think.

I wanted to say something but I couldn’t even scream “It’s COLD!” Nothing came out of my mouth.

Not even a croak or a whimper.

My entire body mutinied, rebelling against anything that kept me outside.

I did try to hug Cale but even that was done in a state of incredible numbness.

Thank God the warm pool was open. It was 90 degrees in the room and probably close to that in the pool. It felt incredibly good even though it hurt.

The funny thing is that despite the fog and faux hug for Caleb, I beat the National Guard unit to the pool!

Emily and the kids were great. They thought I did such a great job, they treated me to a Leprechaun Latte at Starbucks.

It’s now 10 hours since the dip. My body is beginning to forgive me. But it still relapses each time I turn on the cold water to wash my hands.

When I told them about wanting to wear a black robe, they joked about putting a plank in the water so I could walk out on it. That would be a riot!

A digital flash mob for the KJV

All Things Are Yours