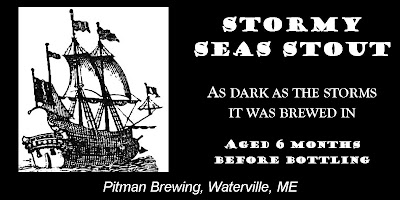 Stormy Seas Stout is my latest homebrew. I love stouts. My first beer, Bombadil, was a coffee stout.

This time I brewed a stout from NorthernBrewer.com called “St. James Gate Foreign Extra Stout.” I renamed it because it was brewed during a summer thunderstorm, racked the first time during a torrential downpour, and bottled six months later during a snow storm!

The addition of a second strain of yeast and the aging both work to mimic the funky, fruity undertones that developed in process of brewing a beer sturdy enough to withstand travel on the seas in Victorian ships. Guinness originally brewed this for travel to the Carribean, Africa, and Asia. Apparently, Nigeria is the largest market for this stout today.

Out of the bottle, the first thing you notice is this beer is black. Opaque. Black as midnight on a moonless night. (Remember that from Twin Peaks?) This is the way I like my beer.

Funky, fruitty it is. Not what I expect from a stout. But much more drinkable than my Mo Joe Stout Porter. It turns out, this stout is a lambic. So it’ll age well for over a year or more.

Which is good. I’m still now sure what I think about this one. But I’ve been assured the flavor will continue to change!

The Stories We Tell