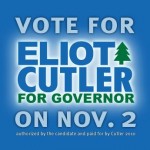 I’ve been speaking to lots of people asking me if I think Cutler really has a chance of winning Maine’s gubernatorial race. You see, they don’t want to “throw their vote away.”

Today, I’m glad to say that it looks like Cutler isn’t the spoiler in the race. According to Colin Woodward:

“Recent polls suggest it is Mitchell who has become the real spoiler. The Critical Insights poll released last night confirms the trend: Cutler has doubled his support base to pull into a dead heat with Mitchell, who has been hemorrhaging support since the primaries.”

Throughout the primaries, people always came up to me and said, “I like Peter Mills but I’m not sure he has a chance of winning.” If each of these people had voted for Peter, we may have had a different Republican nominee.

Let’s not make that mistake with Eliot Cutler.

Yes, being an independent is hard, especially when there are two other independents siphoning votes away. And when you have money rich lobbyists like the Republican Governors’ Association and special interests like the Maine Education Association working against you.

But we’re Mainers. We’re independent. And we don’t need out of state people or special interest groups telling us how to vote.

If like me, you think Eliot Cutler is the right man for the job, vote for him. Vote now at your town office or vote on November 2. You really don’t have to settle for a party nominee this election.

But you will if you don’t vote.

Are you living an adventure?