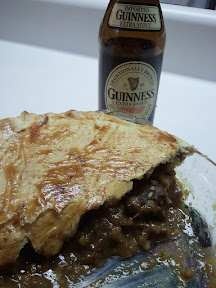 The recipe I used was on Epicurious.com and attributed to Jamie Oliver.

When I went to my favorite butcher, Joseph’s Market, Danny recommended New York Sirloin rather than brisket. Apparently, they only sell brisket in 6 lb sections! (He also made me promise to try making Cornish pasties for one of my pies. He had them growing up and says they’re amazing!)

The recipe was sort of vague, so I got a couple pounds of meat. Everything was combined in a pot on the stove, one at a time. (I forgot the mushrooms, much to my family’s glee.) Oh yes, I also used Guinness Extra Stout. That’s how I roll.

Since this is a stew, I checked another cookbook and added oregano and Worcestershire Sauce. I also added garlic salt.

Then you bake the contents in the pot in an oven at 350 for a couple hours. Boy did the house smell good!

I sampled it about 90 minutes in and thought it a little bland. So I put some Lost in the Woods Hot Sauce to give it a little kick.