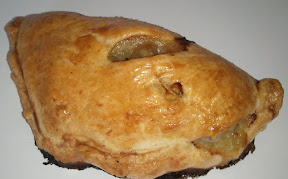 As I’ve been working on my goal of one meat pie a month, I’ve been getting to know the folks at our local butcher shop. Last month, I discovered one of them was from Great Britian. He was excited that I was making meat pies like he knew growing up. (Everyone else here thinks I’m making tourtière!)

He told me I had to make Cornish pasties!

Not only are they a comfort food for him, but they had a cool history. Apparently, miners needed a meal they could eat with their hands but were not sandwiches. And since they were so dirty and sooty, they had to be able to eat with only one hand. Thus, Cornish pasties were born. (For what it’s worth, he pronounced it “pah-stees”.)

These are exceedingly easy to make. I read as many recipes as I could from a simple Google search. (Alas, Blokes Who Bake didn’t have any recipes. Apparently Cornwall didn’t make it to the Kiwis.) But it was so simple, I created my own recipe.

I chopped the potatoes and onions and mixed them with the pork. My son put in some salt and pepper.

For the dough, I unrolled my trusty store bought pie crusts and cut 6 inch circles out of them. I was surprised to get 8! Spooned the filling in the circles, folded them over, sealed them, brushed with egg, cut a slit in the top, and popped them in the oven.

They were pretty yummy!