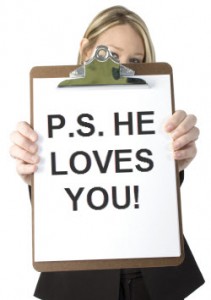 I’m so saddened by people saying God’s mad with them. And by churches telling people only about God’s anger.

I suppose churches do that because fear makes it easier to control people. But it’s not just the churches’ fault. When I pastored a church, I actually had people complain that I didn’t tell them how bad they were. They seriously complained.

God’s anger is a real part of the story. But for crying out loud, so is God’s love and mercy!

That’s what Easter is all about!

I think of God’s anger at some level as being similar to the anger I feel as a parent when my kid’s disobey. I set rules for their own protection and well being. When they disobey, I need to punish them. But I don’t enjoy it.

God’s anger isn’t so much with us. It’s with the one who tricked us. Don’t hear me wrong. We are still culpable and our debt still needed to be paid. So in His love, He became one of us to pay the debt and free us for life again. Jesus said, “…I have come that they may have life, and have it to the full.

If you needed any more proof that God isn’t out to “stick it to you,” check out John 21. If anyone let Jesus down, it was Peter. He denied Jesus three times, right at the hour of his deepest need.

In this chapter, Peter’s back at the fishing. I’d imagine he knew he’d blown it. He had every reason to believe that there was no way Jesus could use him after what he’d done.

But Jesus doesn’t blast him. Jesus restores him. Like drawing the venom out of a wound, Jesus draws Peter back to Himself.

Never beyond His reach

So enough with wallowing in self pity. Don’t let people put you down with threats of his anger. If you’re guilty of something, confess it. Let Jesus restore you. The Good News is He loves us. Extravagantly.

There’s a song by John Mark McMillan that says it so well. Here are some of the lyrics:

He is jealous for me,
Loves like a hurricane, I am a tree,
Bending beneath the weight of his wind and mercy.
When all of a sudden,
I am unaware of these afflictions eclipsed by glory,
And I realize just how beautiful You are,
And how great Your affections are for me…

We are His portion and He is our prize,
Drawn to redemption by the grace in His eyes,
If grace is an ocean, we’re all sinking.
So Heaven meets earth like a sloppy wet kiss,
And the heart turns violently inside of my chest,
I don’t have time to maintain these regrets,
When I think about, the way…

You can get the song for yourself on Amazon at: “How He Loves” [amazon affiliate link]. It’s an amazing reminder. A reminder of Truth.

Are you on a “Wild Goose Chase”?

It’s dark, but you don’t see the whole picture

Daily Bible Reading at the Speed of Life: Announcing 14 Minutes a Day