The King James Version of the Bible turns 400 today.

Normally that wouldn’t have mattered to me. I don’t read the KJV. I associate it with the type of Christians that use lots of other adjectives on their church signs like “fundamentalist” and “blood bought” and (ironically) “independent.” I prefer a more immediately accessible translation like the TNIV.

But last month I heard a great story on the creation of the KJV translation on NPR. I hadn’t realized how much this translation had impacted our language and culture. The NPR story helped give me new appreciation for the KJV.

So I took notice when I learned that the folks at YouVersion, my favorite geeky Bible site and app, were planning a celebration. Their goal? To read the entire KJV of the Bible in 400 seconds!

They did this by dividing up the text among anyone who would sign up to read at the appointed time. They called it a sort of “digital flash mob.”

And sign up they did! According to the YouVersion folks, there were enough people to read the entire KJV eight times in 400 seconds! Here’s a map on where readers came from: 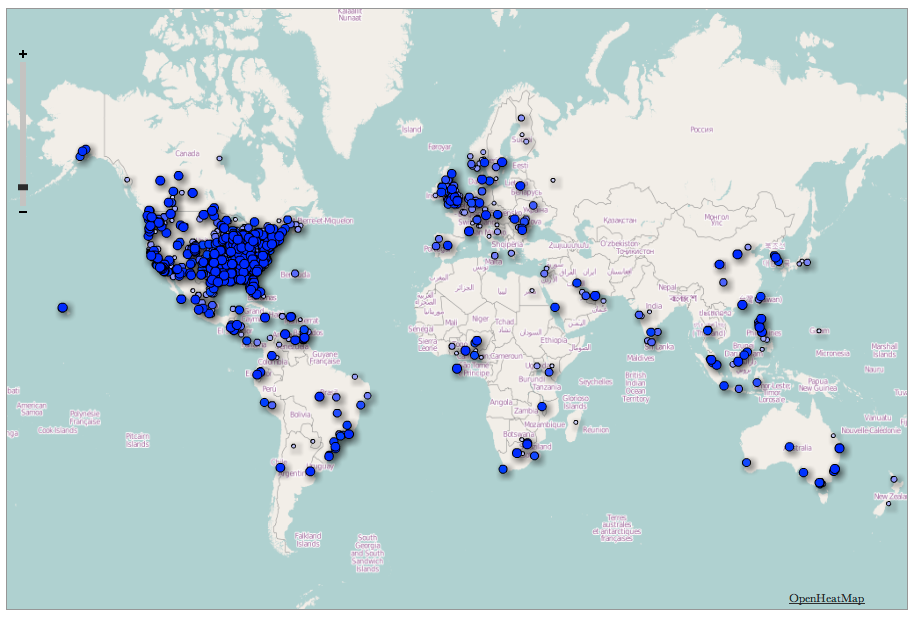 I was assigned Isaiah 64. Not only was it oddly fun to read the now archaic language oddly compelling, I even rediscovered the Hebraic roots of one of my favorite biblical passages like 1 Corinthians 2:9:

“No eye has seen, no ear has heard, no mind has conceived what God has prepared for those who love him” (NIV)

Rather than just reading it, I chose to live stream it from my office using Bambuser. You can see my 2 minutes of reading here:

A fun way to spend part of my lunch hour. 🙂

If you want to learn more on the KJV, check out the story NPR did or click on this terrific infographic prepared by YouVersion (click on it to expand it):

Or you could just start reading it. Why not try reading Isaiah 64?

No, I’m not Dolores Umbridge

Not in a box