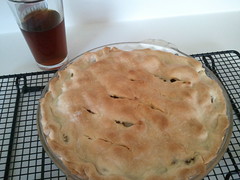 This year I’ve committed to making a meat pie every month. So far I’ve made

This month, I went to Joseph’s Market, my local butcher and asked how to make a “toutiere” pie. You see, Waterville has a lot of Franco-Americans. Every time I’ve mentioned how my speaking tour in New Zealand inspired my goal to cook one meat pie a month, people would say, “Oh…tourtiere?”

I really thought tourtiere was something else. I’d remembered it being sweetish. So I’d say “No, like steak and cheese.”

So I was suprised when Dan said he’d make tourtiere with ground pork, onions, potatoes, and seasoning.

Maybe I have been making tourtiere all this time!

This was the first recipe I didn’t look up to find specific measurements. I used:

I set the potatoes to boiling (I like adding onion salt as they boil). Then I chopped the onions and started browning them in a big skillet with some olive oil. After a while, I added the pork and started adding seasoning. Dan said to keep adding the seasoning until you liked the taste, so I did. I added a lot of seasoning! I also added healthy doses of onion salt and garlic powder.

Once the potatoes were tender, I drained them and added about 3 potatoes to the skillet. Dan was adamant that the potatoes not be mashed. Tender so they are falling apart, but not mashed.

I put that whole mixture in a shell of the trusty store-brand pie crust I love and baked at 400 for about 35 minutes. (I always tinfoil the edges so that the edges don’t get burned or hard. The tin foil can be taken off in the last 5-10 minutes.)

This was super easy. And it tastes great with my home brewed red ale!

For seasoning, I used McCormick’s “Perfect Pinch Original Chicken Seasoning.” Had I looked in the cupboard, I would’ve seen that my wife had purchased Bell’s Seasoning. McCormick’s would probably taste great on a roast chicken, but I think Bell’s would’ve made a better pie.

I’ve got 5 more meat pies to make. Do you have any favorite meat pie recipes?