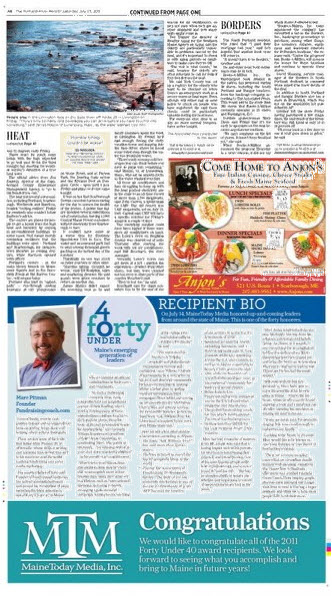 Last month, I was honored to be chosen as one of Maine’s “Forty under 40.” They went across the state looking for leaders under the age of 40 who were having an impact in Maine and in the world.

Glad I made it! Especially since I turn 40 in January! 🙂

Since it looks like this only went into the Portland Press Herald, here’s the text of the profile:

Love of family, trust in God, positive thinker and an unparalleled focus on getting things done and helping others achieve their goals.

These are just some of the traits that define Marc Pitman, 39, of Waterville, whose skills at writing and speaking have served him well in his travels around the world teaching fundraising and social media marketing.

The married father of three and founder of FundraisingCoach.com has indeed accomplished much and earned the recognition of many, including his latest selection as one of Forty Under 40 in Maine who are making significant contributions in their career and community.

“In such a challenging economic time, many nonprofits have lost a significant portion of their funding. Marc’s work is helping many of these organizations continue to achieve their goals by giving them the tools, skills and ‘permission’ to ask for funding help,” says Lynnelle Wilson, founder and president of Bold Vision Consulting, in nominating Marc, who points to his family – “an amazing wife of 16 years and three wonderful children” – as his proudest accomplishment.

Marc’s drive to get things done also might explain how he’s been able to accomplish more in four decades than many have achieved in a lifetime, such as “international speaking, pastoring a church, managing a gubernatorial campaign, writing books, teaching at the college level and raising millions of dollars for charity,” he said.

“The mission of his business is helping nonprofit and philanthropic organizations become self-sustaining,” says Wilson. “Outside of his business, he is very active in his local and statewide community. He’s actively involved in making Maine a better place by getting involved managing political campaigns (Peter Mills) and serving on area boards like the Mid-Maine United Way and actively serving the local public libraries. In fact, his third book Ask Without Fear! for Librarians is inspired by his work with Maine librarians.”

Here are just a few other notable achievements, according to Wilson:

Marc has had a number of mentors in his life, people who have had a lasting impact such as his parents, his first boss in fundraising, Bob Grinnell, and David Dunlop, “one of the most famous people in the field of philanthropy you’ve never heard of,” and his wife – “She has an amazing ability to inspire me, whether that inspiration is a word of encouragement or a kick in the pants.”

Marc draws inspiration from not only his family, but also from his religious convictions and beliefs. “Jesus. As cheesy as it sounds, I owe everything I’ve accomplished to Him. I’ve dedicated my life to discovering how He’s created me and being the best I can in honoring His trust. I could go on and on, but I’ll just say He has had the most impact.”

Still, even with all that he’s involved in, Marc finds time to enjoy the good life at his favorite place in Maine – Waterville, his home, where he often can be found enjoying a book and a satisfying cup of coffee, brewing his own beer, or singing out loud in the car.

“If you see me in a car, I’m probably singing ’80s tunes loud enough to embarrass my family.”

Looking to the future, in 10 years Marc would like to be known as “the Tony Robbins or Tom Peters of fundraising training.”

“There are so many amazing causes that are struggling simply because well-meaning volunteers don’t know how to fundraise effectively. As a certified Franklin Covey Coach, I love helping people discover their potential and design their lives around it. Having a larger platform will allow me to help more people fully fund their cause.”

46 Things Tom Peters Suggests Doing in Times Like These

My current stack of books