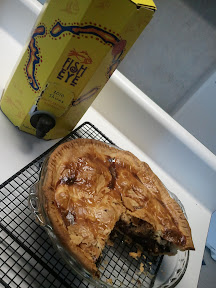 This year, I’ve been making a meat pie a month.

This month I created my own: a beef, bacon, red wine, and cheese pie. (Gotta work on the name.) I’d made pies with beer but not wine so I used some of the Fish Eye Shiraz we had in the box on our counter. I took some tips from this steak and ale pie recipe.

a couple pounds of chop steak
a pound of bacon
a couple onions, chopped
mushrooms, chopped
a cup of wine (Fish Eye Shiraz)
a cup of beef broth
some Worcestershire sauce
some thyme
a dash of nutmeg
fresh ground pepper
flour to thicken the gravy
pre-made crust

I cooked the bacon. Then I carmelized the onions in the same pan. I set them aside to make room to brown the steak. Then I added the onions back in and about a 1/3 cup of flour. Then wine and broth and mushrooms all went in and it simmered for a couple hours. (I added more flour to make it thicker.)

I also cut up 4-5 strips of bacon and added it to the simmering stew.

While that was going, I made some mashed sweet potatoes. (Having just heard Paula Deen on NPR, I added a stick of butter when I mashed it.)

I put the stew in the pie crust and topped it with more bacon and a handful of cheddar cheese. It baked at 400 for 40 minutes. (I brushed egg on the crust just to be fancy. And no, not all the bacon went into the pie. Some mysteriously disappeared in the process.)

Another very tasty pie! A little dry, it probably didn’t need to simmer so long. But still very tasty!