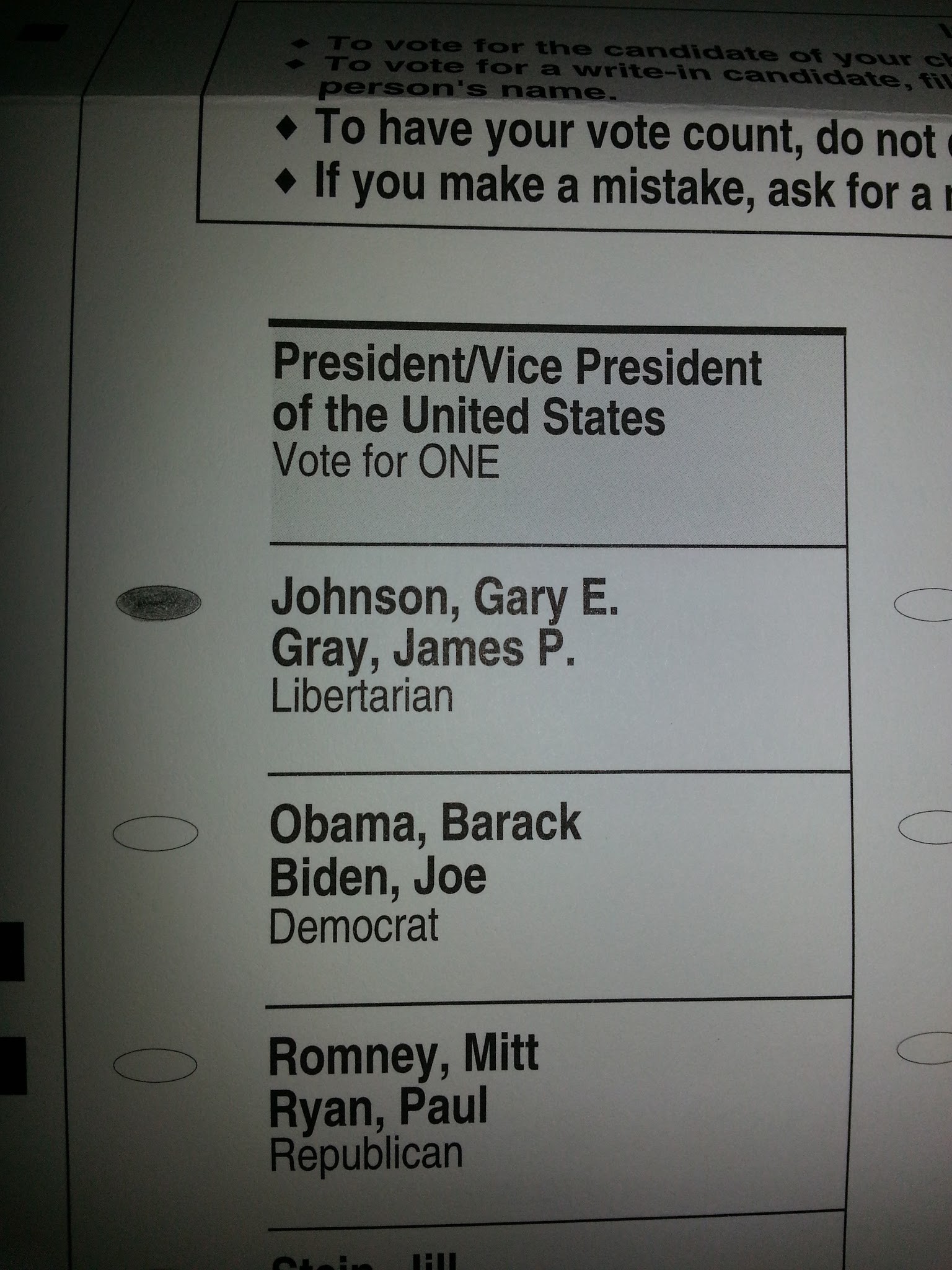 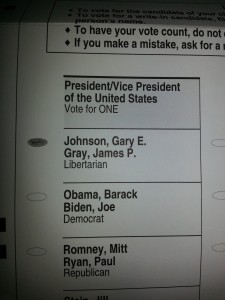 When I voted on Thursday, I didn’t choose Mitt Romney or Barack Obama for president. I voted for the Libertarian Party candidate Gary Johnson. I don’t normally make my votes public, but this year I feel compelled to.

I’ve been a Republican most of my life, much to the chagrin of my Kennedy-loving grandmother. (She thought my parents had failed because I wasn’t a Democrat!) But the Republican Party keeps moving away from me. As Christine Todd Whitman says, I’m a classic conservative. I believe in conservative fiscal management for government but very limited involvement in people’s lives. I have no idea how Republicans who are “social fundamentalists” justify the incredible government over-reaching that comes from legislating morality.

That’s why I said I’d been a Republican “most” of my life. I got fed up with the Republican Party a few years ago and unregistered. More on that below.

But let me tell you why I didn’t vote for Romney or Obama.

Why I didn’t vote for Obama

Although I didn’t vote for him, I was quite proud when Obama won the last election. As a late Baby Boomer/early Gen-Xer (depending on if you think Gen-X starts in 1960 or 1964) and a professed moderate, I thought we might see some change in government. But despite the Republicans not playing nice, he really hasn’t been the bipartisan president he campaigned as. His early attempts at bringing Republicans to the table seemed mostly for show and photo ops, not serious discussion.

This article in The Atlantic shows lots of the contradictions between the Obama portrayal and his actions: incredibly militaristic (especially killing civillians with drones), increased attacks on civil liberties, and actually “normalizing” the executive office excesses of President Bush.

But instead of ending those excesses, protecting civil liberties, rolling back executive power, and reasserting core American values, Obama acted contrary to his mandate. The particulars of his actions are disqualifying in themselves. But taken together, they put us on a course where policies Democrats once viewed as radical post-9/11 excesses are made permanent parts of American life.

I find it really odd that my liberal Democrat friends don’t seem at all bothered by this. The things they were snarky and rude about Bush, are quietly swept under the rug with Obama.

I couldn’t vote for Obama because he’s in many ways continuing the worst of the Bush legacy.

Why I didn’t vote for Romney

Honestly, I never would’ve voted for Romney. I’ve known too many people from Massachusetts to want to vote for him. But it’s how the Republican Party acts that makes me not want to vote for them. None of them really seemed to want Romney to be nominated, but when it became “necessary” they tried to force out all other candidates.

As I said, I didn’t leave the Republican Party, it left me.

I couldn’t vote for Romney because the Republican Party would see that at tacit approval for their power-hungry dishonest maneuvering. I know winning is the goal; but ethics matter to me.

Why I’m voting for Gary Johnson

I’ve learned that in many ways, I resonate with libertarians. I like some of his positions. Of course, there are some things about libertarians that don’t square with my faith. But neither do tenants of the Democrats or Republicans.

What really tipped me over to voting for Johnson was learning that the Commission on Presidential Debates was actively excluding him. Fortunately they lost some big advertisers because of their excluding Gary Johnson from the presidential debates. One of their professed reasons for excluding him? A candidate needs to receive 15% of the popular vote in opinion polls.

Reading that, I realized that according to the conventional wisdom, my vote from Maine won’t “matter” since it isn’t a battle ground state. But my vote for Johnson could help generate the 15% to at least get another voice heard on the national level.

Whatever you do, please vote

I was seriously considering not voting for president. A vote for either Barack Obama or Mitt Romney seemed like a vote of confidence for the mess that we’re in with the two party gridlock.

So this Mainer voted for Johnson for President.

Whether you agree with my choice or not, please choose to vote. We Americans too easily forget what a privilege we have when it comes to voting.

And if you want to lodge a sort of protest with the way things are, I’d urge you to consider a vote for Johnson.