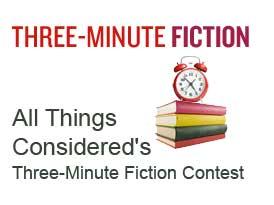 I’m a writer. I’ve been blogging for about 14 years and have written 6 books. But all this writing has been nonfiction.

Ever since I read Stephen King’s “On Writing,” I’ve wanted to try my hand at fiction.

Last fall, I tried my hand at NPR’s Three-Minute Fiction.

All the direction NPR gave was:

For Round 9, guest judge Brad Meltzer asks you to send us original fiction that revolves around a U.S. president, who can be real or fictional.

Mine lost. It didn’t even merit an on-air mention. But I console myself knowing that there were around 4000 submissions. 🙂

Here’s what I wrote:

by Marc A. Pitman 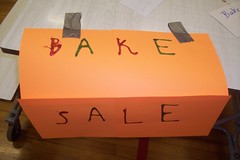 As Ellen watched the young women’s hesitant approach, she thought long wait behind the table was about to be rewarded. But then the woman reached insider her jacket and seemingly out of nowhere a man in the dark suit lunged at her, pinning her to the ground, knocking a single dollar bill she had been reaching for out of her hand.

Ellen sighed. She knew Sam meant well but was overzealousness. As she lost her third sale of the day, her mind went back to daydreaming. For years she’d hated bake sales, so it was odd that she’d been looking forward to this one. She’d felt like she was being delivered a subpoena when her daughter Katie had come home with the school’s photocopied announcement that all parents had to contribute to the class’ fundraising event. Didn’t she already pay enough in tuition to Sidwell Friends? Taking time to bake something that would be sold for a quarter seemed a waste. Didn’t they know how valuable time was?

But she’d missed most of Katie’s school events since taking this new job. The six years had flown by. Katie was no longer a cute seven-year-old second grader in pigtails; she was now a maturing young woman. A teenager almost in high school. With only two more years left in this position, Ellen realized she needed to seize all time she could before Katie was out of the house.

So she’d determined to make changes. Starting with this silly bake sale. Her staff hadn’t taken this decision well. They fussed about the appointments needing rescheduling and the people that might feel slighted. But Ellen stood firm with the resolve that had brought her to this position in the first place. She was a pioneer, this bake sale was yet another case of her blazing a new trail.

She and Katie had a blast. She’d insisted on not letting the cook help beyond making sure the ingredients were at hand. Using her grandmother’s “Gooey Brownie” recipe she felt the weight of her current responsibilities to melt away, reconnecting her with a simpler time when answers were easier and love tasted like fudge brownies straight from the oven.

Ellen smiled as she remembered Katie’s shocked reaction to her first bite of Baker’s chocolate. “Isn’t this supposed to be sweet?” she’d asked. And Katie’s whooping with laughter at Ellen’s futile attempts to crack eggs with one hand. Good thing they had a dozen!

Somehow, working in the kitchen making the brownies had brought them closer than they’d been in years. And working together on the brownie recipe, it seemed like her grandmother was right there with them. They knew, just knew, that these treasured family brownies would be a huge seller.

But that was still yet to be seen. As a blushing Sam picked the flustered young woman off the ground, he turned to Ellen shamefacedly saying, “I’m sorry Madame President. I thought she was about to harm you.”

Ellen sighed. With the Secret Service just doing their job, she wondered if the school would have been able to raise more money if she’d stayed at the White House. Was her really worth it?

But just at that moment, Katie came running down the hall, throwing herself at Ellen with one of her huge bear hugs and shouting, “I’m so glad you came! Thanks for being my mom!”

“Yes,” thought Ellen. “This was definitely worth it.” Being the leader of the free world was an amazing honor. But being Katy’s mom was even better.

Not as Strong as I Think I Am

Ask Without Fear! LIVE a success